My last several blogs have been on the heels of a death.  I’m not sure why that is.  I don’t really think about death that often.  It’s true that I’ve been to way too many funerals lately, and it’s also true that I don’t write nearly often enough anymore.

There’s something in that, though.  I don’t write enough because life gets in the way.

Today’s funeral, Christina’s memorial service, was made necessary by a death that happened much too soon.  I’m no stranger to that, either.  When I was in high school, I went to a funeral for a classmate every year.  I personally don’t think it’s possible to go to the funeral of a young person and not weep.   The funerals I’ve attended for family and close family friends lately have been awful, certainly, but while those deaths made me profoundly sad, Christina’s death was like a kick in the chest.  I had only confided in some close friends the day before her death that her illness seemed insurmountable, but when I read the news of her death I realized that I had never quite accepted the possibility that she might actually die of her cancer.

If I didn’t understand that feeling before today, her memorial service made it quite clear.  We didn’t come to talk about her death; we came to talk about her life.  There were tears.  There was sobbing.  The family and friends who stood up to speak about her openly wept, and we all wept with them.  What else could we do?


I went away feeling like I had been completely drained…

…and completely filled.  I was completely filled because her life spilled over into everyone she knew.  I have not seen Christina in several years, but I never felt that (partly because of the magic of the internet.)  A few comments here and there about cats and teaching, about musical theatre, about her beautiful little family–those were plenty to talk about.  She talked about living and dreaming and loving, and it infected everyone she knew.  So did the family and friends who spoke at her service.  Any one of them would have been justified in their pain and loss if they stood up and shook a fist toward heaven and the God who took her away, but they didn’t because they were infected more by her life than her death.

About an hour I made another stop to reconnect with someone I hadn’t seen in about 18 months.  “Henry,” as we will call him, is 80 years old, and after a series of strokes which have left him unable to walk or use his left arm, he’s in an assisted living home.  I got to know him quite by accident a few years ago when he moved to town.  He was lonely and he needed some help, so I did what I could.

After his first set of strokes a couple of years ago, he was in a nursing home and quite addled.  He was unhappy, and I get that.  If you know that things aren’t quite what they should be and are not quite able to wrap your brain around what is happening, I’m sure it’s enough to make anyone angry and scared.

The place where he lives now seemed quite nice.  It was clean, the residents were clean and seemed well cared for, the staff was friendly.

Yet, when he saw me he burst into tears and immediately asked me to get him out of there.  He said the food was bad (and I’ll admit that it didn’t look so great) and the staff was bad.  He said it wasn’t a nice place, that it was a bad place with nice paint.  He said that his family should care for him, but they won’t.  He can’t use his left arm.  He can’t walk.  He can’t listen to his music.  He said he has even lost his intellectual life because the “old people” there have already lost half their minds.  (There were 4 other gentlemen at his table.  One attempted to tell him to eat, but gave up.  After the last comment, another of the men wheeled himself out, making me think that he had plenty of brains in his head.)  He said I looked different.  My hair looked different.  I looked older.  He said I’ve always had a weight problem, but my face looked thin.  He said this with more tears and telling me how much he loved me.  He said he just wanted to die.  Even though we were sitting in a crowd of residents, each sentence was started with him howling my name like a puppy that has been locked away and made to watch its people leave. 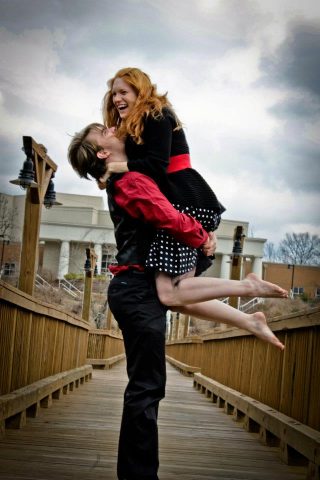 Sweet Christina lived.  When I knew her, she was a kid who was quite blind to all the things that keep us from loving each other.  She loved fat people, skinny people, bald people, socially awkward people, crazy old accompanist people, gay people, straight people, Christian people, non-Christian people.  She just saw people, and people were put here to live, and living was loving to Christina.  She was Sally Brown in “You’re a Good Man, Charlie Brown,” and I could say a dozen or a hundred things about how hard she worked on her part.  She was a great Sally, though, because she was fierce in living and loving.  Where she loved, she did not take no for an answer.  When she was made to look death in the face, she met it with all the life she had in her.   At her service today it was impossible to talk about what we had lost because she focused on what she had.

Poor Henry, however, is quite blind to the life that is trying to hold on to him.  I’m not saying that he has no cause to complain, and I’m not trying to minimize his pain.  However, when I met him several years ago and he was relatively healthy, he was adept at focusing on all the things that were not living.  Any time I attempted to encourage him, he focused on what he had lost rather than looking for what he still has.  In his 80 years, he has not discovered what Christina had found in her first 20 years and mastered before her 28th birthday.

Ah, Christina.  We weep because we feel the world is less whole because you died too soon, but the truth is that it is a much better world because you put so much more life in it than you took with you.  We will be inspired to try to live in such a way, and we will be richer for it.  Tonight I am far more disheartened by those who still live without life.  I weep in pain for Henry, and weep with gratitude for you.  Your life, not your death, made us hold each other tight.

“The thief comes only to steal and kill and destroy; I have come that they may have life, and have it to the full.”  John 10:10

* If you recognize this quote, I love you better for it.  You also know that I could pontificate for hours if I were to connect this to the thoughts I just shared…but maybe we should save that for another day.