But Charlie, don’t forget what happened to the man
who suddenly got everything he always wanted
…he lived happily ever after.
(Willy Wonka and the Chocolate Factory)

Several years ago I went over to my friend Wendy’s house for something or another on a Saturday evening.  I can’t remember what it was.  Maybe I was borrowing a movie, or maybe I was babysitting for her.  Maybe I was there to cry on her kitchen floor; I did that a lot back then.  It doesn’t matter.  Whatever I was doing there wasn’t as important as what happened in the driveway.

I usually parked in her driveway in the turnaround, but I had to park on the street.  The cutest car in the entire world was sitting in the driveway in my way.

I have never felt the way I felt right then about a car.  The closest I had come was a couple of weeks before, when I was sitting in traffic somewhere over near Panera.  A car of the same make—a yellow MINI Cooper Convertible–was in front of me at a traffic light, and if it (the light, not the car) hadn’t turned red on me I think I would have chased it down.

So those of you who have been in love may understand how I felt when I saw a gunmetal gray MINI convertible in my friend Wendy’s driveway.  It was like seeing him across a room.  (Cue Rodgers & Hammerstein.)  But this one was right in front of me.  I think I actually walked up and touched it.

Within minutes I discovered that the object of my affection was the property of a good mutual friend of ours.  On the one hand, I guess it was exciting that I knew someone who owned such an adorable vehicle.  On the other hand, I had never coveted a friend’s car before.  It was a bit uncomfortable for me.

I wanted that car.

I couldn’t have that car.  At the time I was the sole proprietor of a gardening service.  My love of convertibles was not new; I was aware that it is highly impractical, messy, and even somewhat dangerous to haul gardening supplies and debris in a convertible.  I had to keep my F-150.  I couldn’t afford a second car.

But I really wanted that car.

I couldn’t have that car.  But, like I said, it belonged to a mutual friend of ours, one of my gardening clients, in fact.  I babysat for them, dog sat, and even house-sat for them.  It turned out that it’s also inconvenient for a family of 5 to go on vacation in a MINI.  I got to MINI-sit more than once.  (For those of you who see one of my metaphors coming, fear not.  The owner did allow me to motor in his MINI, but only in the literal sense.  There is no metaphor here that directly relates to that part of the story.  Be calm.)

I really, really wanted that car.

I couldn’t have that car.  Not then, and not that car.  It was barely a year and a half later that I decided to quit my business and go back to school.  I needed to trade the truck for something with better gas mileage.  I’ve always admired and respected Honda Civics, but when I started to do the research on them, I didn’t like the new body style.  I had a wild hair:  I looked up the MINI.  I found that it had better resale, was more efficient, was significantly less expensive to insure, and for only $1,500 more than a Civic, I could get a convertible MINI.

And sometimes, if you’re patient and keep your wits about you, you get what makes your heart pound.  Sometimes. 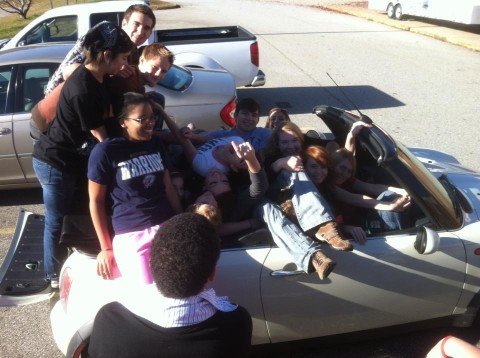