Cleaning Out The Closets

This time last year I was packing.  In addition to what I had in my classroom, I had an office with a wall full of shelves, a 3-sided desk, a huge horizontal filing cabinet and a wardrobe.  In those spaces I had accumulated the things that a teacher accumulates over 5 years:  Student work, study materials, copies of the hogwash that comes down the pike, memorabilia, and heaps and heaps of music. 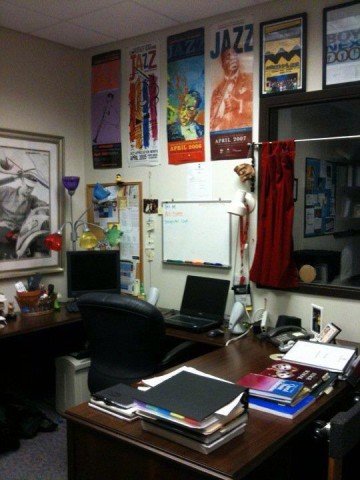 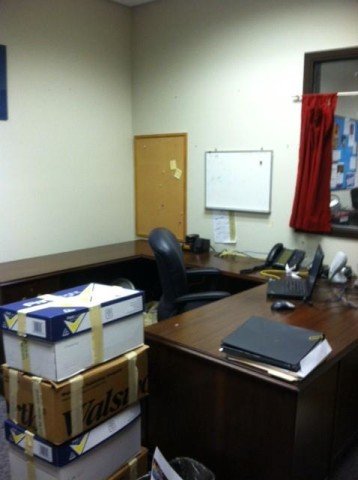 As I packed it all up, I discarded all that I could—the things that were outdated, duplicates of what I had, and the things that I simply wouldn’t need anymore—but I still brought home 30 boxes of stuff.

The problem with that is that I live in a tiny house.  I don’t have a basement, and the attic is not suitable for storage space.  So I piled those boxes in the spare bedroom, literally to the ceiling, and I started cleaning out the house.

I started in my office.  I needed shelf space, so I did something I have not done in my entire life.  I purged my book collection.  I have a large collection of juvenile literature, and I gave everything that wasn’t hardback to my niece and nephews.  I gave a lot of my paperback books to the Hall Book Exchange.  I gave two more large boxes to the county library, along with most of my VHS movies.

Then I started on the closets.  In one closet I had all of the leftovers of both grandmothers’ quilting and sewing scraps, notions, and tools.  I sorted all the material by kind and then by color.  I organized the notions and tools.

I have two filing cabinets and a bookcase in my large walk-in closet.  I purged all three.  I destroyed the documents that needed to be destroyed, threw out the trash, and condensed the rest.  I sorted and filed pictures, playbills, and letters.

While I was at it, I got rid of the clothes and shoes I haven’t worn in a while.  I didn’t really need to do that, but while I was already in the closets, it seemed like a good idea.

It took a long time.  There was a lot of dust, a lot of “what the HECK is this, and why did I keep it?!” and a lot of hauling things away.  Before my great purge, I wasn’t completely blind.  I could walk into that big closet and see that I had drawers full of old landscaping catalogs that I just didn’t need anymore.  There was just no need to toss them out before I did.

But in other areas, I didn’t realize that I would find damage.  In the bottom of one built-in bookcase, I found damaged and molded drywall from an old leak.  I had to take out what was in there, clean it up, and repair the closet before I could put my things back in it.  There was dust, there was dirt, and there were things that had become ruined after years of neglect.  (Rubber bands, for instance, just don’t age well.)

I had to prioritize along the way, too.  There simply is not room in this tiny house to put everything where I can easily lay hands on it.  Some things had to be packed away behind other things, and the materials I use often were put in the more accessible areas.

1)   I realized that I had accumulated a lot of crap in my life.

2)   I threw away a lot of the crap that I had accumulated.

3)   I made room for the things that were still important to me, and I put them where they were the most usable.

(Yes, you should see the metaphor in this one coming from a mile away.)

This process was a mirror of what has happened in my life over the past year.   In the recent months, I became more and more aware of how buried I had become in my last job.  I was covered up and consumed by the “stuff” that came with the job to the degree that I no longer functioned as a member of my community.

While being released from the job itself was part of the cure, there was more work to be done.  Obviously, I had to throw away the physical things from my office and closets that I no longer needed, the duplicates, and the outdated stuff, but along the way I had to learn to do that with the stuff that had accumulated around my heart and mind as well.  I had to get rid of poisonous relationships, people who drained me, and negative voices.

The inner cleaning turned up surprises that were as surprising and ugly as the moldy closet.  Similar to the physical process, in the inner process I found dust, dirt, and places of my heart that were ruined from disuse and years of neglect.  I even had a twenty-year-old wound that was reopened and excised.

I found stuff in my soul that didn’t fit anymore, stuff that probably never fit me in the first place, and stuff that made me ask, “What the heck was I thinking?  Why did I keep that?”

When I was finished with the project in my home, I found myself living in a home that isn’t nearly as cluttered.  I know where my things are.   Because it isn’t so cluttered, it is also cleaner.

It’s the same with my heart.  I just made a last-minute trip to my old stomping grounds.  Because of the old wound that was recently cleaned out, I went back for the first time without feeling the old heaviness.  I knew more about who I was, then and now, and was able to enjoy myself  more than I had in years when I had visited Franklin.

But here’s the challenge:  I’m headed into a new phase of my life.  Tomorrow I start a job at a new school.  How will this affect my closet inventory?  What will I need to take with me?  What else will I find that I don’t need?  Can I keep my things organized as life gets busy again?

It’s the same with my heart.  Where will I find that my newly organized life is more efficient and effective, and where is it still prone to screw up?  What are my fears, and where am I prone to failing?  How can I keep it free from clutter?

That’s the trick of it.  Closets and hearts aren’t made to be filled up and shut off, nor are they made to be empty.  They are meant to function and to be used.  They will both get messy sometimes, but if they are in use, they will get cleaned again.   Being used is what makes a heart and a closet so important.

Closets hold the stuff we use in life.  A heart holds the stuff that makes us alive. 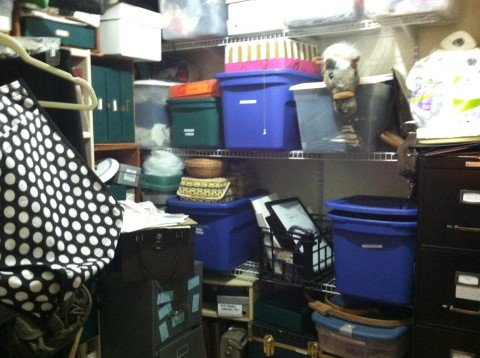 (photos:  Top: More than a year before I had any idea I would pack up that office.  Eventually, show posters went to the ceiling.  Middle:  The last day before I moved out.  Bottom: My 8′ x 8′ walk-in at home.  Believe it or not, this is the “after” shot.  It’s not House Beautiful, but I know exactly where everything is.)