Does This Make Me Look Fat?

A few days ago, I got rebuked by a well-intentioned friend.  He was probably right, for that matter, so maybe I shouldn’t even qualify his intentions.  Whatever.  This is what happened:  I was holding a dear baby friend (literally, a friend who is a baby, as in one who drools a lot and poops his pants) and remarked that said baby is getting fatter (as babies do.)  I further remarked that I knew how he felt.

This is the blog I’ve almost written several times about one of the things that has been a burr in my saddle as long as I can remember.  It has been my arch-nemesis, my bugaboo, my horrible Red Knight. 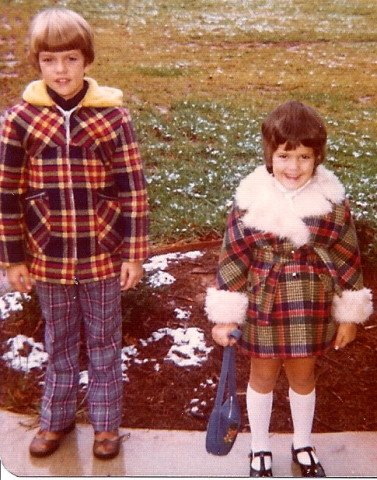 When I was a young girl, I stayed with a local family while my mother was at work.  The two little girls there were skinny.  I was round.  When I started school, polyester was the thing.  It was cute (by the standards of the ‘70s) on girls who were built like Marcia Brady, but not so much on girls who were built like 1st-grade linebackers.  To make it even worse, I had one of those awful “pixie” haircuts.  I was shaped like a garden gnome, but not like a pixie.  I only needed a beard and a pipe.  More insult to injury—I wore glasses.  There was nothing cute about glasses in 1978…or 1979…or into the early ‘80s.  I thought that growing out my awful, short hair would at least help me look like a girl, but think about it—how many 8 to13 year olds have really attractive hair?  (If you’re 8 to 13 and you’re reading this, your hair is perfect.  Really.  It’s not 1982, so you don’t have the same worries.)

Back in my day, girls were normally not that athletic, either.   There were a few basketball players, a few runners, a couple of swimmers, and a handful of tennis players among my friends, but it was nothing like today.  The girls in my chorus class today would wipe the floor with me and my girlfriends from the good ol’ 80s.  Our idea of exercise was going to the mall…or something…actually, I don’t remember doing anything much more strenuous than talking on the phone for most of the school year, and this was back when we only had landlines.  We couldn’t go for a walk while we were on the phone, like I do now.

Summer was the only time I was really active.  I loved to swim.  From the time it re-opened sometime around 1981, I was at Green Street Pool almost every day.  My mother put my bike in the back of the station wagon, and I went with her to work.  I slept in the car in the parking deck until about lunchtime, then I rode down Green Street and stayed at the pool until it closed.  I swam, I took diving lessons, and eventually I became a lifeguard there.  I was never a fast swimmer, but I was a strong swimmer.

Even when I was a lifeguard, I never got over how I looked.  I gave up on 2-piece bathing suits before I started grade school, but bathing suits still horrified me.  After I started diving, I remember my brother coming up to me one day, laughing.  He told me that a group of boys were impressed that I could do a gainer—not that I was only 13 or 14 and doing a gainer off a 3-meter board, but that someone of my size could do it at all.

If I look at pictures of myself during my teenaged years, I think now that I really wasn’t that fat.  Heck, I would love to be that size again.  But back then, I couldn’t stand how I looked.

I dieted.  In fact, I can’t really remember when I wasn’t “watching what I eat.”  Yes, like just about everyone I’ve ever known, I sometimes eat more than I should in one day or one sitting, but even on my worst “gorging,” I’ve never been able to load up a plate like some of my skinny friends and family.   Diets tend to stop my metabolism and backfire.

A few years ago, I was near my heaviest[1], and I was having trouble with it.  I had problems with asthma.  I felt sluggish.  I was wearing clothes two sizes too big for me.  A friend of mine invited me to come watch and/or cheer her on for the Disney marathon that was to take place one year later, and it was the last straw for me.  I hate running, and I knew then how much I hated it, but, by granny, I wasn’t going to let myself or anyone else think for another minute that I was a wimp just because I’m overweight.  I started running—2 miles, 5 miles, 8 miles, 15 miles.  Within 10 months of the initial, unintentional “challenge,” I had run my first half marathon—my first of 6 half marathons.  I completed the Disney as promised.  (A hitch in my knee meant that I walked a lot more than I wanted to, but I still ran most of it, and I still got the medal.)

I lost almost 40 pounds and ate more than I’ve ever eaten in my life.  Unfortunately, I don’t have a runner’s body, so I eventually quit.[2]

Six years later, I have Leanne’s body, and it’s getting softer again.  I don’t regret my run of running—my asthma rarely makes an appearance in my life anymore.  My blood pressure and cholesterol have always been spectacular, and my blood sugar and triglycerides are great.  I can jump on a trampoline longer than a 25-year-old without getting winded, and if I had a good excuse to do it, I’m sure I could still swim the coves of Lake Lanier.

But I don’t see those things in the mirror.  I don’t see my health in the pictures that I see of myself.  I only see the outside.

Leanne’s body doesn’t fit in a runner’s clothes anymore—it fits in long, loose, flowy, things.  One of my darling students posted a picture of me today that made me think, “Wow.  Jabba the Hutt has hair just like mine.”

People say that they look at the heart, but it’s not true.  I’m sure that most people want to only see a person’s character, but they don’t.  When I lost that weight several years ago, I was horrified by the change in how I was treated.  I was included in things I was not included in before.  People were friendlier.  I’m sure they didn’t mean it, but they were.

1)  I can’t solve this problem, and I don’t expect you to do it either.  Now that my ankle is healing, I hope that I can get back to kickboxing because I really enjoy it.  I plan to “get in shape.”   In good health and bad, my shape is round, and I don’t have much reason to believe I’ll be a skinny old lady.  I have every reason to believe I’ll be an active old lady, and that I will probably go to my grave with a bowl of ice cream in my hand.

2)  If you’re still reading this, you didn’t leave the room.  Thank you.  I get the feeling that you know I’m not asking you to tell me how pretty I am, that I’m not truly fishing for your compliments, or even hoping for you to say that I’m not as fat as I think I am.  That’s not my point here.  I’m finally writing this, with my personal demon sitting next to me on the couch, offering me bon-bons.[4]  I suspect you’re still reading this because you know how I feel.

You’re too fat, too.  Or you’re too skinny.  Or your teeth are too big.   Or your eyes are funny-looking.  You hate your hair.  You hate your bald spot—the one you knew was coming when you were 17.  You don’t know how your pants even stay on because you have no butt.  Your boobs are too small.  You have pasty white skin.  Your eyebrows look like caterpillars, or maybe like just one caterpillar.  You have duck lips.  You have an enormous chin.  You have no chin.  You have three chins, even though you’ve never been overweight a day in your life.  You’re too short.  You’re freakishly tall.  You have a squeaky voice.

Can I tell YOU something?  Someone loves you for it.  I swear it’s true.  That cowlick is the cutest thing that someone has ever seen, but the best part is the way you just live with it.  There is something endearing about the way you try—and fail—to cover up that zit.

I’m going to stop hating myself for being Leanne-shaped someday, I hope, but if I do it’s because I will finally realize that the only time I’m really alone is when I’m hating myself.  Someday I’ll figure out how to love myself the way that others love me, and when that happens I hope my gaze will be forever turned outward.  Someday I’ll figure out that loving others, warts and all, is the only thing that is truly beautiful about me.

[1] The size I am now, if you want to know the truth, but now I don’t have the health issues.

[3] I really, truly don’t care about sports.  I would love to go to the Braves game with you if tickets are cheap and you don’t mind me cracking jokes the entire time.  Seriously.