I don’t like the time-space continuum.  It is often inconvenient, and sometimes downright cruel.  I learned early on that tardiness had consequences.  (In fact, I am one of those annoying people who over-learned it, and now if I’m not aggravatingly early, I get stressed.)  When I started to college, I had to drive 250 miles between school and home, across time zones.  I lost an hour coming home.  Irritating.

But while these are legitimate gripes, they are not my primary gripe.  My first run-in with the time-space continuum came right after kindergarten when my best friend, Melony, moved away.  She was my very first best friend, and I lost her before we even started the first grade.  Here’s the ugly part—she only moved an hour away.  I knew she wasn’t really that far, but for a 6-year-old, she may as well have moved to the moon.  Even worse, her extended family still lived near me.  I knew she came to town to see her grandparents, aunts, and uncles, but you know how that is.  Family visits have to come first, and they leave little time for sandbox buddies. We had to content ourselves with writing letters (and, truth be told, I’m grateful that my long-distance friendship with Melony taught me to write letters when I was young) and with occasional visits.

Like most of us, I could carry on with these stories.  My friend Jennifer (who is partly responsible for this blog) is living in Germany again.  Only a few years ago, Wendy was one of my neighbors, but even though she’s not that far away, I haven’t seen her in five years.  That wasn’t even really her fault—for a lot of those five years, I was buried in my job and didn’t see many of my friends at all.

As frustrated as I am with the problems that come when friends are too far away to be everyday, close friends, my frustration serves as a microscope.  (That’s often the case, isn’t it?)

This week I went on vacation with my family.  All by itself, vacation serves as an excellent example—generally speaking, a vacation is a trip that’s too far away and too long to be considered convenient.  By nature, it is meant to interrupt the flow of our working weeks and get us away from our everyday surroundings to somewhere that is pleasantly unfamiliar.  It is a natural break in the time-space continuum in some respects.

But it is often also a way to repair the rift.  About half of the vacations I take involve visiting people that I can’t see in person on a regular basis, friends who live far away that I don’t see for long periods of time.

This is where I am most brokenhearted and also most relieved.

This week, I got to visit with a friend from college.  I remember that one of the first things that drew me to her was that she had a jumper that I loved.  Not one that I admired—one that I LOVED.  I had one just like it, and I loved it to rags.  I knew she was cool.  But she was better than just her clothes; she was fun.  Over the years, I haven’t been able to see her in person, but through the magic of the internet, I kept up with her.  She was better than just fun.  She is good people.  She is a kindred spirit.  I went to church with her last week, met her family, and something about that visit–sharing our faith–reinforced that she is one of those people outside distance and time.  She is one of those people who will always be a kindred spirit to me, even if two decades pass before I see her again.  (I really hope it’s not that long!)

Last night, my family went en masse with me to visit another family of friends.  If I wrote all that I feel about them, and I just might, it would warrant its own blog.  I met them, for lack of a better explanation, by accident.  An acquaintance of mine needed a ride to their house, and when I showed up on their doorstep they adopted me on the spot.  They loved me all the way through college.  If you know anything about me in those years, you know that loving me was a full-time job back then.  I was a mess.  We only lived in the same town for a few years, which seems amazing to me now.  (It’s also amazing to me that I’m older than they were when I met them, and their children, who I babysat and diapered, are older than I was when I met them.  They are a little bit older than my parents were back then.  It doesn’t seem possible.)  They live 700 miles from me now, their children are grown, and our lives are a lot different than they were 20 years ago, hopefully for the better.

It’s hard seeing them because it reminds me how much I hate to be away from them, but there is something else that seems stronger than missing them.  Whenever I see them, I have the overwhelming feeling that time and space as we know it—the sort of time and space that pulls us apart—is not reality.  It feels so wrong, and so fake.  C.S. Lewis, in my opinion, had the best handle on it.  This life is the Shadowlands.  It’s a shadow, a reflection, an imperfect image of what our life really is.  We are outside eternity, but we are made for a life that doesn’t know separation.

That’s what I see when I meet some of the people in my life, the people who are my old friends the instant we first say hello.  You know who you are, and you know who those people are to you.  That’s what I feel when I get to see people like Christi, the Griffiths, and even Melony again; why it’s both hard to leave them and a little bit easy, too.  It’s hard because it’s not right, but easy because it’s not the end.

This isn’t our home, and this isn’t the end.  It’s just where we learn what our lives are really about. 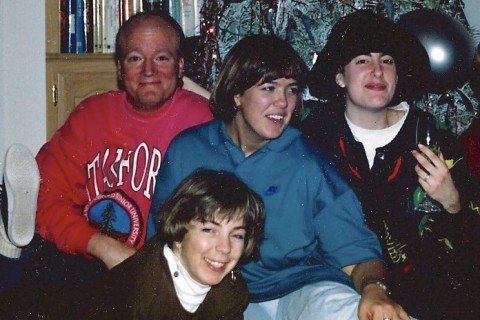