One of the hardest lessons I’ve ever learned, a lesson that was amplified in the events of the last 16 months, is that some friendships are not what they appear to be.

I think it happens a lot in the workplace, and I suspect that it’s simply because at work you have no choice in who you are with.  For eight hours a day, you have a new set of friends.  We all know that we can’t please everyone all the time, and we know that not everyone will like us.  But if we are smart, we learn to get along with the people we have to spend time with.  If we are really smart, we learn to enjoy it.

This is one of the reasons that I think high school is harder than any other time of life.  For most of the day, students are forced to do something they like with people they don’t know for no immediate gratification.  On top of that, they’re immature by definition and drowning in their own hormones.  (Next time you hear a kid whine about school, keep that in mind.)

So it’s quite a shock to leave a job, school, or other circumstance and realize that the people you learned to like—or even love—are just people who used to work with you.  Of course, this isn’t always the case.  Sometimes, whether by accident, coincidence, statistics, or Providence, we end up shoulder-to-shoulder with people we truly love, especially when we are doing what we really love.  But figuring out that even one person we really worked to like is only a friend for a certain season still smarts.  I grieve over those people, despite all my best reasoning and self-pep talks.

It occurred to me that these friendships are seasonal.  The analogy that came to mind was my red wool winter coat.  I love that coat.  My mother bought it for me one year because she still buys me better-looking clothes than I find for myself.  As much as I love that coat, it hangs in the closet 9 months out of the year.  In Georgia, it gets very cold for a few months, and then it’s just too warm for a wool coat.

Does that mean that I only love it when it is cold?  Is love only based on need or usefulness?  Is it based on “out of sight, out of mind?”

Another analogy:  As the title of this blog and its first entry indicate, I spent a lot of years outdoors as a gardener.  Although I left that business 7 years ago, the lessons still linger.  Yes, there are friendships that are seasonal.

Some are like trees and shrubs.  They live long lives and are always there, unless there is disease or disaster.  Some of them go dormant for the winter (and can be expected to make awful messes in the process,) but even while the plant is dormant the roots are still growing.  Some of them are evergreen, but even an evergreen doesn’t always look pretty.  The rhododendron can be quite pitiful looking in the winter, and it’s a very temperamental bloomer in the summer.  Even so, its green leaves stay put to gather sunlight to keep it alive year-round.  Those friends, likewise, are always there, whether it is their “season” or not.  They’re not always at their prettiest, and the friendship certainly needs some maintaining to stay healthy, but they aren’t expected  to wither away.  When times are tough, those are the ones I can always go to.

Some friendships are like the annuals that we put in our flower pots.  No matter how pretty and even healthy they are during their season, they die when the season has ended.  Unless they reseed, which is a precarious business (except in the case of annual weeds, which are really good at reseeding successfully, and that’s another story) they don’t come back.  Once those friends are gone, they are just gone, and it’s best to just pull out the roots and start over every year, understanding that certain people, like certain plants, just aren’t going to be there for the long term. 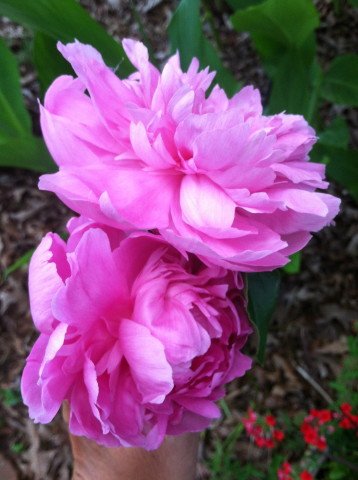 Other friendships are perennial.  They flourish in one season, but they go dormant for a long time.  I think of my grandmother’s peonies that are in my front yard.  For much of the year, they aren’t much to look at.  Heck, if you didn’t know where to look, you couldn’t even find them for four months of the year.  For seven months of the year, they are just a green plant.  They spend a couple of months shooting out of the ground, and several months just being green.  For two glorious weeks, they are spectacular.  From Mother’s Day to the end of May I check on them twice a day.  I cut the blossoms to put in my house, and I make sure the buds don’t get broken before they have a chance to open.

Are the perennial friendships less valuable than the permanent ones, then?  I work in theatre, and when I close a show, I understand that I will never again be in a room with that particular group of people ever again, even though I just spent weeks on end with them.  I work with students who pour their hearts and energy into what they do for me, and it may be years before I see them in person again, much less before I get to work with them again.

But although they aren’t the ones I run to when my world is crumbling and my heart is breaking, they are so very beautiful to me.  If they were the flowers in my yard, I would run out to stake up their buds and watch them bloom.  (Let’s not talk about fertilizer here.  Let’s just not.)

My grandmother left me two favorite plants—her peonies and oxalis.  There are three things I love about the oxalis:  1) its overall appearance, 2) its perennial hardiness and longevity, and 3) how it shows up in odd places.

It doesn’t look good all the time.  In the winter, it is pretty much just a little pile of mush, but so am I, so I don’t judge too much.  But it does some great things the rest of the year.  At its best, it has pretty green foliage that looks like shamrocks and tiny pinkish-lavender flowers, and it grows in a dome shape.  In the summer (like right now) the foliage tends to burn and die back, but the flowers stay.  Later in the fall, the foliage will come back before giving it up for the winter. 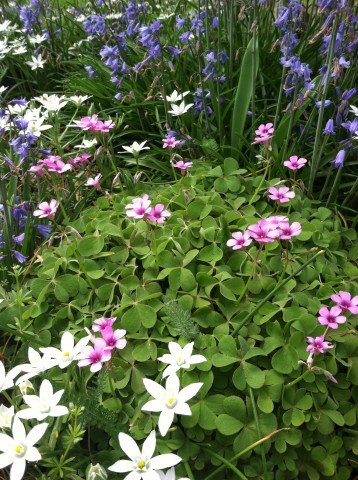 I have no idea how the plant propagates, but it does.  It spreads through my flower beds, pops up in the yard, and even ends up in the woods sometimes.

When I was landscaping, I would sometimes give a clump to a client. Recently, I found that it was still flourishing in a backyard of a new friend who moved into an old friend’s home.

And that seems to be a good place to make my point.  Lately I’ve been so pleasantly surprised by some of my perennial friendships.  Yesterday, a high school friend offered to lend me her shoes, even though I’ve only seen her once in twenty years.  The day before that, a friend from elementary school (who, again, I’ve only seen once in twenty years) wrote me a note of encouragement that almost brought me to tears.

Do I still grieve over the friendships that wilted and died?  Yes, I do, and I hope I never stop thinking that individuals are important.  But I think the reason Jesus used so many horticultural examples is because plants are an excellent illustration.  We never know where a seed will land or where a flower will grow.  Flowers fade and die, and during some seasons we almost have more flowers than we can handle.

But the hardy ones–the ones that can know how when to bloom, the ones that can stand being cut back, the ones that feed on their foliage when the time comes, the ones that use the dormant season to put down good roots–they come back.  They thrive, especially when they are protected and cared for.  (I didn’t even talk about weeds, did I?)  And in the process, they make our world a bit more beautiful.

“Cover up your seeds,
Pray the sun and rain will last,
Keep cutting back the weeds…”
(Wes King, “Snake in the Grass.”)