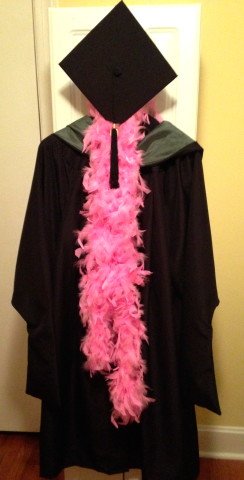 Sometime in the next 48 hours I might just don my mortarboard and a feather boa and have myself some commencement exercises.  That is how I feel about leaving 2013 and heading into 2014.  It has definitely been an awkward year, and I think I’ve done my time, paid my debt (to society or whomever,) and have graduated.

This is a good analogy, and I’m gonna keep rolling with it.  I’ve graduated before.  I’ve sat through many-a required course that wasted my time (and/or money) just to satisfy the powers that be.  (As an undergrad, I took beginning swimming after 4 years of lifeguarding.  I also took a sailing class, because that’s what commercial pianists need to survive in the real world.  Thank goodness I also needed that P.E. credit when I switched my major to philosophy.)

I wouldn’t trade my education for anything.  If you don’t believe me, come over to my house sometimes.  I have my class notes dating back to Mrs. Ingram’s British Lit class.  (If you are one of my teachers from North Hall, please don’t be offended.  I just didn’t take very good notes until my senior year.  It wasn’t your fault—it was mine.)  I don’t just have some of my notes; I have all of my notes, except from sailing class, for obvious reasons.  (I also have 90% of my textbooks, even though I never read a single one of them.[1]  This might be more about my book hoarding than it is about my love of education, hence the parentheses.)

I digress.[2]  My point is that school is not really that much fun, even though it’s worthwhile.  It’s a means to an end, and the end is a really ambiguous one.  That’s why it’s a great metaphor for life.

2013 was tough.  This time last year I was unemployed for the first time since I was old enough to hold a job.  It wasn’t a two- or three-week unemployment; by this time last year I had been out of work for 8 months and searching for a job for nearly 10 months.  By January, I went numb.  Nobody hires teachers in January.  Worse, I didn’t have any prospects for any shows, and I needed money.

One morning at the end of January I got a phone call.  I answered it, and heard a voice that I literally had not heard in years—a musician who was in my shoes back when I was just a high school kid (even though he isn’t that much older than me.)  He needed someone to play 2nd piano for a 4-handed show.  It was truly a bolt out of the blue, and one of those jobs that did as much for my heart as it did for my finances.  It was fun; it was edifying.  One night during the 2-week run of the show, I looked out in the audience during intermission and saw another friend, a principal at a local private school.  I had checked with that school when I first lost my job, but when I saw him, I thought, “Hmm.  Wonder if I should check with him again.”  Turns out that when he saw me, he thought, “Hmm.  Wonder if she needs a job.”

This is where someone else would tell you that the rest is history, but I’ve never been someone else.  I interviewed for the job even though it had two red flags against it.  (Nothing against the school itself, mind you.  I love the school, and have loved it for years.  For example, I was not considering a job in elementary education, and this job was kindergarten through 12th grade. More on that in just a minute.)  In the interview process, another red flag came up–it wasn’t quite a full-time job.   On top of that, the school is in a temporary location—that is never fun.  But I was thrilled when they offered me the job, not because I was desperate, but because I somehow knew it was the right job in the right place.

And it has been really hard. This is from a teacher who spent her first year teaching performing arts at a military school. Is every day really hard?  Yes.  Am I miserable.  Of course not.  Those aren’t the same things.  I get up looking forward to going to work, and I love those kids like crazy.  The teachers at my school show me love that I don’t deserve, and most of them have only known me since April.  The head of the school gets me.  A lot of people have appreciated me and valued me in the past, but she really gets me.[3]  I’ve dealt with great parents before, but this time I get to see the great parents, and they’re wonderful.  So yes, it’s a great job.

But it’s really hard.  It’s really hard, and I’m going back to my original metaphor here:  Life is like a commencement ceremony.[4]  Funny, the word “commencement.”  It’s used for graduations—the end of time served in education—but “commencement” is the beginning of something.  My job is hard because I’m new, and people don’t know me.  It’s also hard because so much of it is new to me.  Kindergartners?  They don’t even speak English, for crying out loud.[5]  Teaching music to kindergarteners is like juggling ferrets.  But they love hugs and talking about kitties. It’s adorable.  Teaching elementary school is hard, I tell you, especially teaching a “special” class.  It took me an entire semester to figure this out, so if you teach a “special” class to elementary students, pay attention:  A “special” class only meets once a week, so they’re excited to be getting out of their “not-special” class for a while.  Some of them actually like what I’m teaching, too.  This means that I have 15 or so really excited young kids streaming into my classroom for just 45 minutes a week, and I spend 42 of those minutes trying to get them to stop being so excited about just being in class.   I’m a “get it done” type of person, and it’s really hard to get anything done.  Some teachers know how to channel that excitement, I’m sure, and in about 18 more years I hope I’ve also learned the trick of it.  But like the kindergarteners, they love hugs. They love to be loved. It’s heaven.

As for the older kids—I love them.  Some of them are very talented.  (I inherited a great choir, for instance.)  They work hard.  I’m really excited to have them.  So I often feel like I spend about 42 of our 45 minutes of class time trying to figure out how to best spend our time because I’m really excited.  I see my senior high students look at me the same way I look at my kindergarteners, then I see them loving me.  It’s humbling.

On top of this, this is a really kind-hearted school filled with kind-hearted students and parents.  I’m about as gentle as a chainsaw.  I’m not a vulgar or profane person, but I’ve already been in trouble several times over my intensity and/or phraseology.  Some days I feel like my heart[6] has been handed back to me in small, bloody bits.

This year was a commencement.[7]  Driving home the first week of the fall semester, I thanked God that he didn’t think I was too old to learn to teach kindergarteners, or too set in my ways to clean up what I previously thought was a clean enough way of communicating.

Back when I was in college, having left commercial piano for philosophy, I took Greek.  I’m awful at languages, but I really liked that class.  One of the passages we had to translate was from Philippians 3, mostly because it kept switching tenses in an odd way.  It almost doesn’t make sense in English; it sounds like the continuation of a previous thought, but it isn’t:

12 Not that I have already obtained this or am already perfect, but I press on to make it my own, because Christ Jesus has made me his own.13 Brothers, I do not consider that I have made it my own. But one thing I do: forgetting what lies behind and straining forward to what lies ahead, 14 I press on toward the goal for the prize of the upward call of God in Christ Jesus. 15 Let those of us who are mature think this way, and if in anything you think otherwise, God will reveal that also to you. 16 Only let us hold true to what we have attained.

I haven’t obtained this or am already perfect.  I press on.  I haven’t made it my own.   I forget what lies behind.  I strain forward.  I press on.  It’s a confusing lesson, but we hold true to what we have attained.  This is what I look forward to this year.  I’m not looking for a job; I’ve found it, and I know that I’m exactly where I’m supposed to be.  It’s okay that it’s hard.  It’s even good that it’s hard, for that matter.  I haven’t succeeded yet; I fail every day.   But I’m working on it, and I pray that I will keep on working on it for many years to come.

[1] Someday I will write a book about how to go through college and graduate school without ever reading a text book.  The book will consist entirely of the table of contents, bold print, illustrations and captions.  I hope no one will ever read it.

[3] How do I know this?  I am pretty sure that she has wondered more than once why in the world she ever hired me.  I’ve seen it in her eyes.  And then I see that look that says, “I get you, Leanne, and I’ll fight for you.”  I love her.

[6] Yes.  I have a heart.  That’s probably my biggest handicap.  Leave me alone.

[7] This sentence is an example of a metaphor.  Told you I knew the difference.